Aaaaaaaah! Is out on DVD, Blu Ray and VOD…. 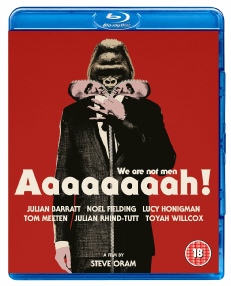 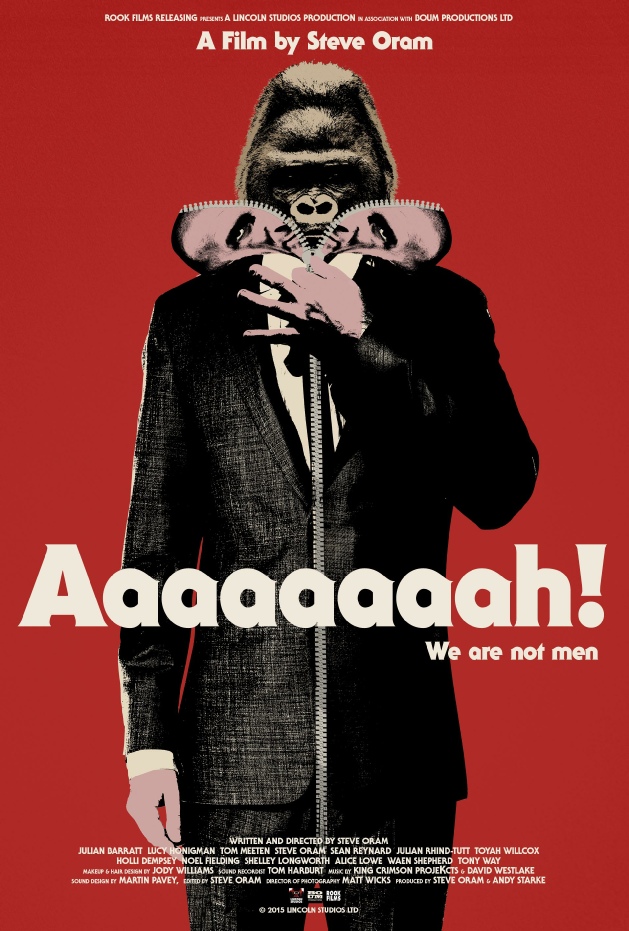 Proudest bloody day of my life. Us here at Lincoln Studios have finished our first ever feature film!!!! It’s called AAAAAAAAH! I almost had to be given the kiss of life when I finished watching it round the director’s place last night. I collapsed to the floor head in hands, I was so overwhelmed. It was better than when I finally opened the salon in Grantham after 16 months of crap with the contractors. It is a fantastic feeling for me but the credit goes to the brilliant actors, crew and production team.

Here’s the poster for AHHHHHHH!!!! Shitting hell it’s brilliant isn’t it! And f-ing creepy. Won’t be putting it on my wall. Don’t fancy seeing that when I get up for a pee in the night, I’d probably wet myself on the landing!!!! Designed by an American feller called Jay Shaw I think, who has relatives in North Hykeham. Yours. Derek Evans

Got up early to take the dog out. The sunrise was fantastic, will suggest that to the director as an idea for the next film.

Had a panicked phone call from the editor saying he had just pressed delete and lost half the footage of the film. I said not to touch another button and drove straight round to pick him up and take the computer to Currys. A very helpful young lad there called Will found the lost footage for us in the recycle bin and was able to restore it. Phew! He also suggested an upgrade form Windows XP to Windows 7 to avoid that happening again.

It’s at  moments like these that I think of that cracking Iron Maiden track ‘Run To The Hills’. We might be off the beaten track here in Lincoln but you can bet we’re putting the willies up the UK & US movie industry  right now.

So here it is, the first official trailer for Aaaaaaaah!

I’ve got to go out for petrol this evening, so see you at the Esso in Bracebridge and let me know what you think of it. Yes, even you Michelle! F-ing exciting!!

Had news through from the fantastic lads at Fright Fest in London that tickets for Aaaaaaaah! are selling like they’re going out of fashion. Reminds me of when I first started doing half price autumn spray tan deals at the salon in early 90s. Bloody hell we were booked solid with ladies just back from Spain and wanting to stay  topped up. And you know what, many of em are still my loyal customers to this day!

Anyway, get yourself down to this site, they won’t be there long. The person who buys the last ticket wins a free twenty minute session on the machine of their choice!!!!

So, the tickets for Aaaaaaaah! at Fright Fest have all now sold out! Bad news for my brother Michael and his wife who don’t like the internet and told me they’d just pay in cash on the day. Well Mike, get with the program mate we’re not in the 1980s now! And nor is the movie scene here in Lincoln!!! The future has arrived and this TOTAL SELL OUT has sent a message out to our competitors such as Warner Bros, Sony Pictures etc that we have arrived!!!!!! You might think it a bit churlish of me not to offer Mike and Sue a couple of freebies. Well I actually did but they don’t have a clue about it because they don’t read their emails. I’ll have to go round and tell them.

Travel plans for our trip to London taking shape. Ron will be driving me and the wife. And we’re hiring a minibus to bring down cast and crew. Booked in 10 days at the Premier Inn at Elephant & Castle. Money is no object for the release of Aaaaaaaah! We’re going to have the time of our lives and hoping for a carnival atmosphere at the screenings. If you couldn’t get a ticket for Fright Fest join us at Picturehouse Central on 4th Sept. TICKETS ON SALE NOW (click to the left!) 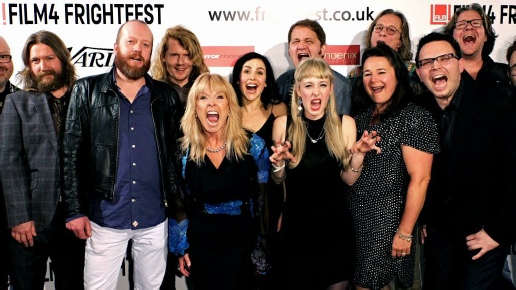 It’s a knackering business shooting a film, even though I’ve just been sitting around most the time trying not to get in everyone’s way. Apparently in one of the more ‘intimate’ scenes you can see me in the background messing around with the ring tones on my mobile. They had to do another ‘take’ because of it. I felt bloody terrible about that and bought everyone a curry and beers to say sorry. It’s funny watching the crew running around like ants. It’s hard to know what the hell they’re doing half the time. Probably nothing! 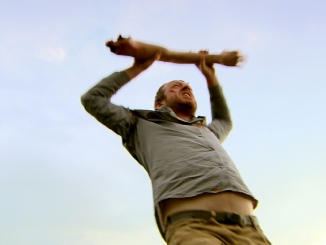 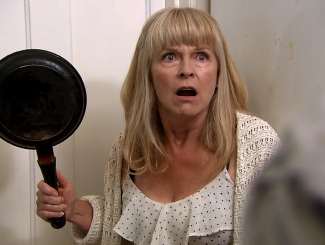 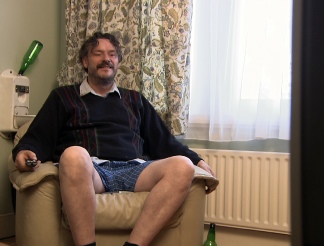 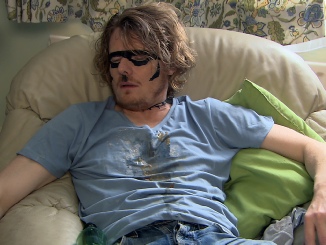 Well what an amazing night for Aaaaaaaah! at Fright Fest. It was an absolutely cracking venue in Leicester Square with a top notch screen and excellent facilities. The first thing I did when we got there was to buy a massive round of hotdogs for the cast and crew, money is literally no object on this trip to London! Well, what a fantastic bunch of people they are at Fright Fest, nothing was too much trouble. First up the cast had to do interviews on the ‘media wall’, which was basically just a load of people with cameras and microphones shouting. Then there were photographs, honestly it was just like something you might see at the Oscars or after a court case. There were cameras flashing, people shouting the atmosphere was electric. See the brilliant picture of the cast below! Unfortunately yours truly isn’t in it as I had been having a bit of gyp with my flask and it had leaked tea into my rucksack so I was faffing around with that and missed the line up! What a night though, even a leaky flask couldn’t put a dampener on it!! Aaaaaaaah! was on in a fantastic screen called the Discovery Screen with about 300 seats, very comfortable with good leg room. It was a complete sell out crowd with everyone shouting and clapping like the monkeys in our film, it was the proudest night of my life!! After the screening there was a q & a with some of the cast. For those of you who saw me at the Lincolnshire small business seminar in 2012 it was like that, but times 100!!! The cast answered questions and the crowd lapped it up. I have to say afterwards I had to disappear to the bogs and shed a private tear. After all we’ve been through and everything I’m not ashamed to admit that I felt quite emotional. Mind you I’ll blub my eyes out at an episode of Lewis, but this was different.

When I had the original dream of becoming a movie producer, I could never have imagined the highs I have experienced with Aaaaaaaah! I am a local celebrity, Sharon in Greggs wouldn’t even let me pay for my Cornish pasty yesterday! It’s unbelievable, it really is. And to shed some light on the whole thing, we at Lincoln Studios have made a film where the cast talk about their experiences making Aaaaaaaah!. I think I might get a mention or two, not that I’m suddenly a big headed twat like Ron was saying at the pub last night. Far from it, I am a humble tanning salon entrepreneur with some cash, the real credit must go to the incredible cast and crew who made this film.

We’ve had some cracking mentions for Aaaaaaaah! in the press. It’s been humbling to say the least, although I was always confident we had what it took to smash the domination of the USA in movie making and divert it to where it’s really happening - Lincoln! You might think I’m a dickhead for saying that, but you only have to look at how crap their films are getting to know they must be worried. To say thanks I have offered the writers of the following pieces 7 free tanning sessions at the salon whenever they want. Should be enough to get em all looking fantastic for upcoming film festivals like Cannes. Read on and enjoy!!!

Well knock me over with a feather, if this isn’t the best double bill ever! Our bloody fantastic film Aaaaaaaah! followed by Prevenge, a terrific film about a pregnant bird who knocks people off. I’m dead chuffed, these two films have got something for everyone! Even my 88 year old mum is coming down with us from Lincoln to watch it. She’s a big fan of Last of the Summer Wine and Are You Being Served, but since I’ve introduced her to the films we’re making at Lincoln Studios she’ll watch nothing else. The only problem she has is with foul language, but luckily for us there isn’t even any language at all in Aaaaaaaah! Mind you that Alice Lowe might want to worry what with all the f-ing and blinding in her film, my mum’ll probably corner her at the screening and tell her to wash her f-ing sh–ing mouth out!

Hope to see you down there! As usual I’ll be in the front row, middle seat with a massive tub of popcorn. I know every grunt and screech of Aaaaaaaah! off by heart now, so will be mouthing along. Even without any words Aaaaaaaah! has classic lines to rival anything any Hollywood film can produce these days. 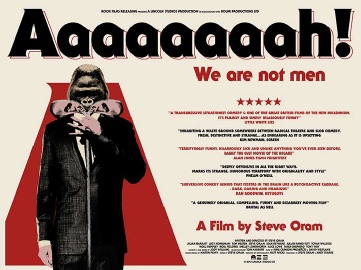 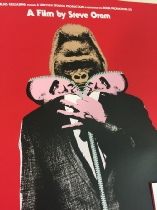 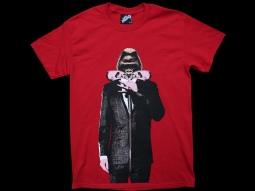